A collection of tiles from Park Güell

To be honest this post has been driving me nuts. You know when you just can’t seem to do something justice with words (or even in pictures)? That’s how I feel about all the Gaudí stuff we visited in Barcelona. So instead of a long narration of all the things we saw, I’m just going to throw it out there with a few captions and comments. I have WAY too many other things I want to blog about and my need for things to be perfect and my ability to procrastinate (they’re related you know) is getting in the way of moving on. So with that disclaimer out of the way, here’s what we saw:

Casa Batlló aka “the building that looks like bones”… sadly we didn’t get to go inside.

I didn’t know much about Antoni Gaudí before we arrived in Barcelona. I vaguely remembered learning about him in an art history course. If you had asked me to name one of Gaudí’s works I would have said, “Didn’t he do that crazy colorful building that looks like bones?”

We were absolutely delighted by what we discovered in Barcelona. Gaudí’s style and influence  is unmistakable throughout the city. Did you know that his works in Barcelona are actually a UNESCO World Heritage Site? All the colors and shapes are just stunning and our photos really don’t do them justice. You absolutely must go and see it for yourself!

We had intended to visit La Sagrada Familia on our first day in Barcelona but the line to go inside the church was huge and we have an impatient toddler. So we admired the exterior and enjoyed the fantastic playground (I love kid friendly cities) across the street!

You might be surprised to learn that La Sagrada Familia is not a cathedral. It’s actually a basilica. But if I were to try to describe it to anyone I’d say it was a cathedral of light and color. It is truly one of the most ethereal spaces that I have ever experienced. Which is funny because from a distance the outside kind of looks like a hot mess. But don’t be distracted by the cranes and construction. When you get up close and go inside its breathtaking. 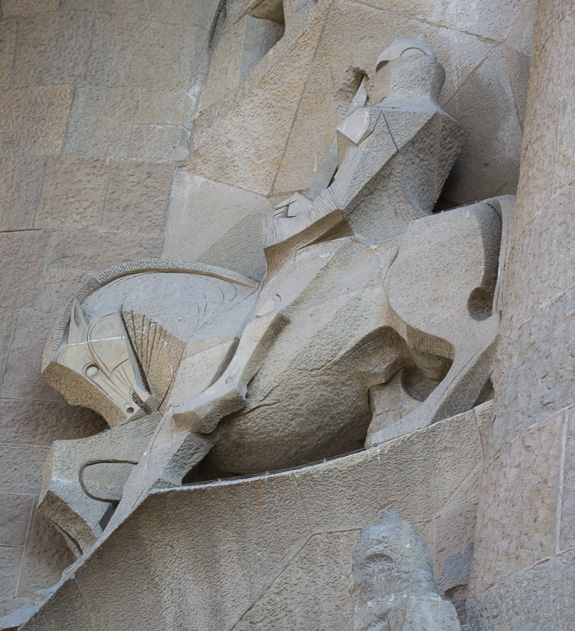 Detail from The Passion Facade at La Sagrada Familia

After admiring the outside the day before we were really excited to actually go inside the next day. With our advanced tickets purchased online the night before (highly recommended) we practically waltzed right in. The interior honestly took my breath away. I couldn’t believe how light and airy it felt compared to the formidable exterior. The colors and shapes were so different than anything else I had ever seen in a church. It is a truly mesmerizing space and really these photos are just a tiny glimpse of what’s inside. 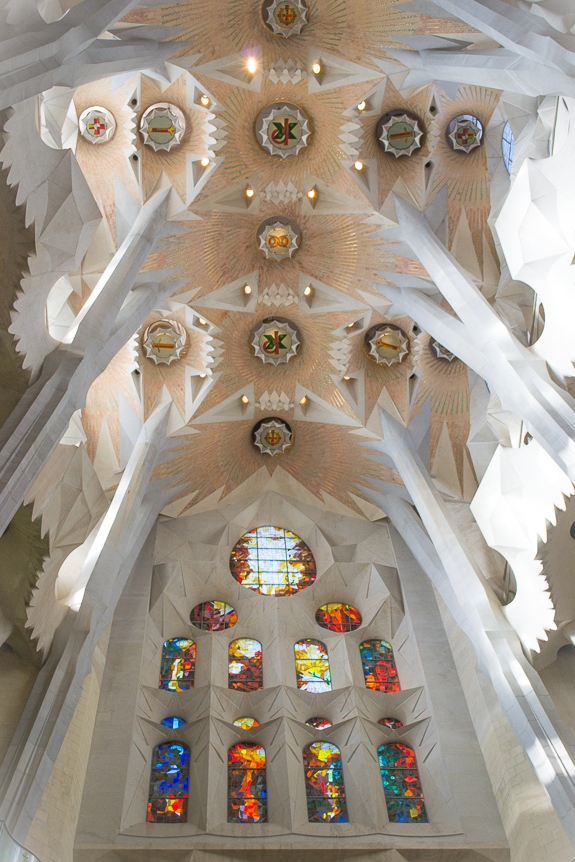 Light dancing off the ceiling and glass

The columns and walls awash with color from the stained glass

Parc Güell wasn’t actually intended to be a park. It was originally conceived as a posh subdivision in the Gracia neighborhood of Barcelona but finances got in the way. Which is lucky for the rest of us because it is much too beautiful to not be enjoyed by all.

Hanging out on the Serpentine Bench

The view of Barcelona from the Serpentine Bench

After a very long and uphill walk to Parc Güell we were rewarded with breathtaking views of Barcelona. Walking all the way to the park with 25lb. stroller and 33lb. toddler is probably not something I would do again. Tip: Take public transportation unless you really like walking. All that walking made us mighty thirsty.

So we had to get a mini pitcher of sangria. It wasn’t that good, but that’s not the point.

Looking north from the terrace at Park Güell, where you can have a sangria under the palm trees!

And this is what’s below you, supporting the terrace!

The whole park almost feels like it’s been carved out of the hillside.

Even the fences are beautiful at Park Güell 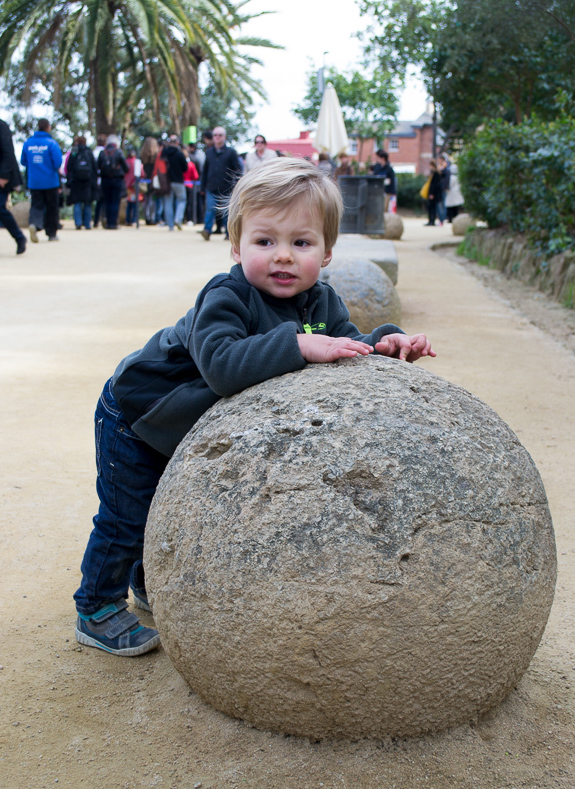